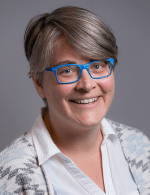 Ellen Geurts (MSc Technology and Society, Technical University in Eindhoven 2003, and MSc in Housing, WITS University Johannesburg, South Africa 2005) is a housing specialist who has worked as a consultant, lecturer, trainer and researcher since 2005.

She is currently a lecturer in Building Economics at the Faculty of Architecture of Delft University of Technology. Before that, she spent two years as a lecturer in Built Environment Studies at The Hague University of Applied Sciences (THUAS). From 2007 to 2018, she was an academic staff member at IHS, where she continues to lecture in the capacity of a guest lecturer and thesis supervisor.

At IHS, she lectured in the Urban Housing, Equity and Social Justice specialization on finance, policy and public housing issues. She also lectures in several short courses of IHS and used to coordinate the short course “Developing Social Housing Projects” and the ‘ICHUD’. At IHS, she was also involved in acquisition and management of project activities at IHS and developed many project proposals, including composition of consortium teams, selection of experts, methodological development and budgeting. She was the project manager for a number of international urban management projects of international clients. In addition to her core expertise in the field of housing, she has been and remains involved in the Urban Heritage Strategies courses at IHS. Her geographical focus and experience is predominantly on Central and Eastern Europe, the Balkans, and Sub-Sahara Africa.

Before joining IHS she worked for a Dutch consultancy firm. Her main focus was on advisory and capacity building projects with municipalities in Central and Eastern Europe; with a focus on the management of high-rise housing and energy efficiency measures. In addition, she conducted international studies on housing policies for and worked on a large evaluation study for the EC. During her studies, she co-developed a Municipal Housing Policy Toolkit for South African municipalities, which is still implemented by the South African Local Government Association. During her studies, she has conducted field research in Tanzania, South Africa and India.